I can not afford to book the whole band. Can I book them as a duet, trio or quartet?
Yes, you can book part of the AlpenMusikanten, as a duo, trio and/or quartet. Of course, you won’t get the full effect of the complete talented, charming, totally entertaining, humorous, wicked, party animal, fun to watch full five piece Band!! Do you see what we did there?! 😀

Can I buy their CD’s or T-Shirts somewhere?
Yes, of course. AMk has currently four CD’s available, including a beautiful Christmas CD, and also several T-shirts, available wherever they are performing, or on their online shop (click “Shop” menu on top)

Do they autograph their CD’s or T’s by request?
Of course! Next time you come to see them at one of the festivals, just bring your AMk CD or T-shirt and they will be delighted to sign it for you.

Do they also perform in other states besides Texas?
Yes, they sure have and do. The Alpenmusikanten love to travel. They have been hired to perform in Oklahoma, Louisiana, Georgia, Kentucky, Wyoming, Arkansas, and even as far as California. The AlpenMusikanten always look for new and exiting places to entertain a crowd.

Can I get on their mailing list?
Yes, you can. Just fill out our mailing list form and we will let you know where and when we are playing and when our new CD’s will be available.

Can I book them for private parties or weddings?
AMK is able to adapt to any type of occasion, doesn’t matter if it is for a small crowd or thousands of people ready to party. Oktoberfests, Weddings, Birthday and Anniversary Parties, Holiday Parties, Conventions, Corporate Events, etc., etc.

I have seen the letters “AMk” show up throughout your site, what does AMk stand for?
Well,…Alpen-Musi-kanten, of course. Alpen means Alps or Alpine, and Musikanten means simply musicians. Hence, Alpine Musicians. Of course, for some folks it’s pretty challenging to pronounce. We have even been called the Alpine Muskrats! Ha!

Do the AlpenMusikanten only play polkas and waltzes?
HECK no, we do praise ourselves with having a pretty wide range of musical styles. We cover everything from polkas, waltzes, sambas, cajun, big band, swing, dixieland, …….all the way to rock and blues, or whatever other style of music you can think of. It’s all about providing  our faithful fans which whatever they are in the mood to listen to. Where else are you able to hear Freebird on an accordion, or a German version of Another Brick in the Wall.
AlpenMusikanten, THE ultimate party band for your occasion!

Alan, Gordon, Manfred, Paul and Wolfgang have been playing at the Bavarian Grill since our opening in 1993 – and have become great friends to both the team and our guests. AlpenMusikanten performances in our Biergarten are always sold out and great fun for all attending. A New Year’s Eve Party without the AlpenMusikanten is unthinkable, don’t even try! If you want your guests to laugh, clap along, chicken dance, have a great party and applaud your decision to hire this professional band you should call ALAN.

In 2002 we were fortunate to have Alpenmusikanten entertaining at our small Oktoberfest ‘house party’. Our guests had such a great time, so we hosted the party for the next 5 years – – we didn’t even consider moving forward without Alpenmusikanten. Our neighbors, friends and business colleagues are still talking about those parties – clearly the focus of the fun was always the diverse musical presentation mixed with controlled mayhem and overall good times provided by these talented and personable guys.
Then in 2008 we volunteered to serve our community by assisting the McKinney Main Street organization in organizing their first annual Oktoberfest in McKinney’s historic town square.  Fast forward…we just completed the fourth annual McKinney Oktoberfest, and I’m happy to say Alpenmusikanten played a key role in all four Fests to date.  Just as was the case with our small private party, I can’t imagine this major event taking place without the contributions of Alan, Gordon, Wolfgang, Manfred and Paul.  Guys, thanks for all the great times over the past decade!

We go to Helen, GA every year for Oktoberfest and we plan our time there around when Alpenmusikanten will be playing there. They are all excellent musicians and creative and innovative entertainers. Their harmonies and yodels are the best.

Recommended CD of the month 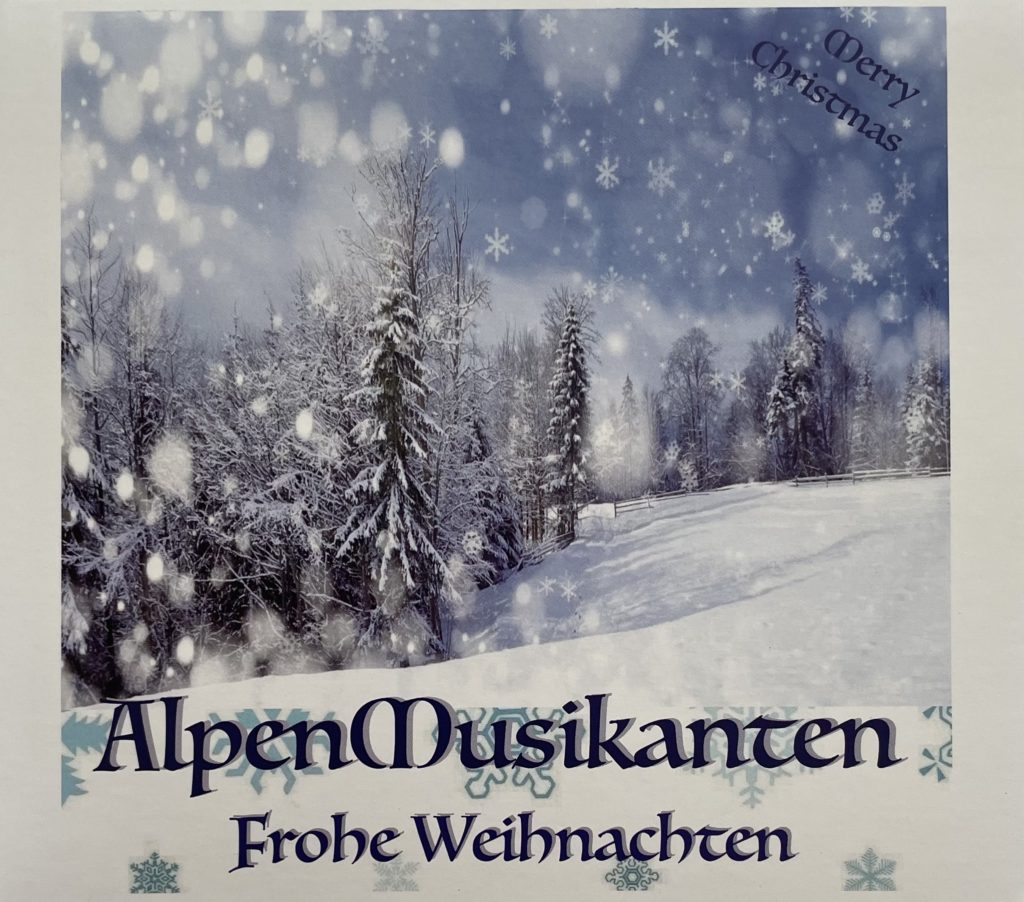